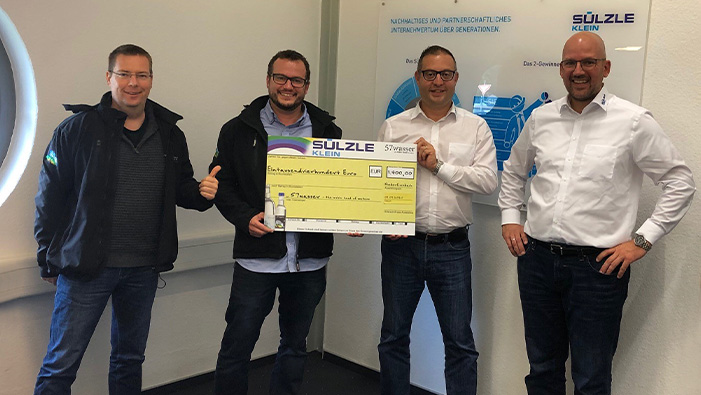 57wasser was founded by two friends, Dirk and Björn, on the occasion of World Children’s Day on September 20, 2012. With the help of (Facebook) fans and fellow campaigners, they were able to launch its water on the market on December 8, 2012. 57wasser relies on the Robin Hood effect: Dirk and Björn donate 57% of the profits to social and humanitarian projects in Germany and around the world. The selection of projects is made by the fans and always puts a strong focus on small projects that support children.

This great idea shows that you can do good even with simple things (for example, drinking water). Managing Director Frank Scheidt (on the right in the picture) and Sales Manager Claudio Dinnella (in the middle on the right in the picture) are pleased to be able to give a donation check for 1,400 euros to Dirk and Björn on behalf of the entire Sülzle Klein GmbH and thus support their great work.

Support of the parents’ association of children with cancer in Siegen